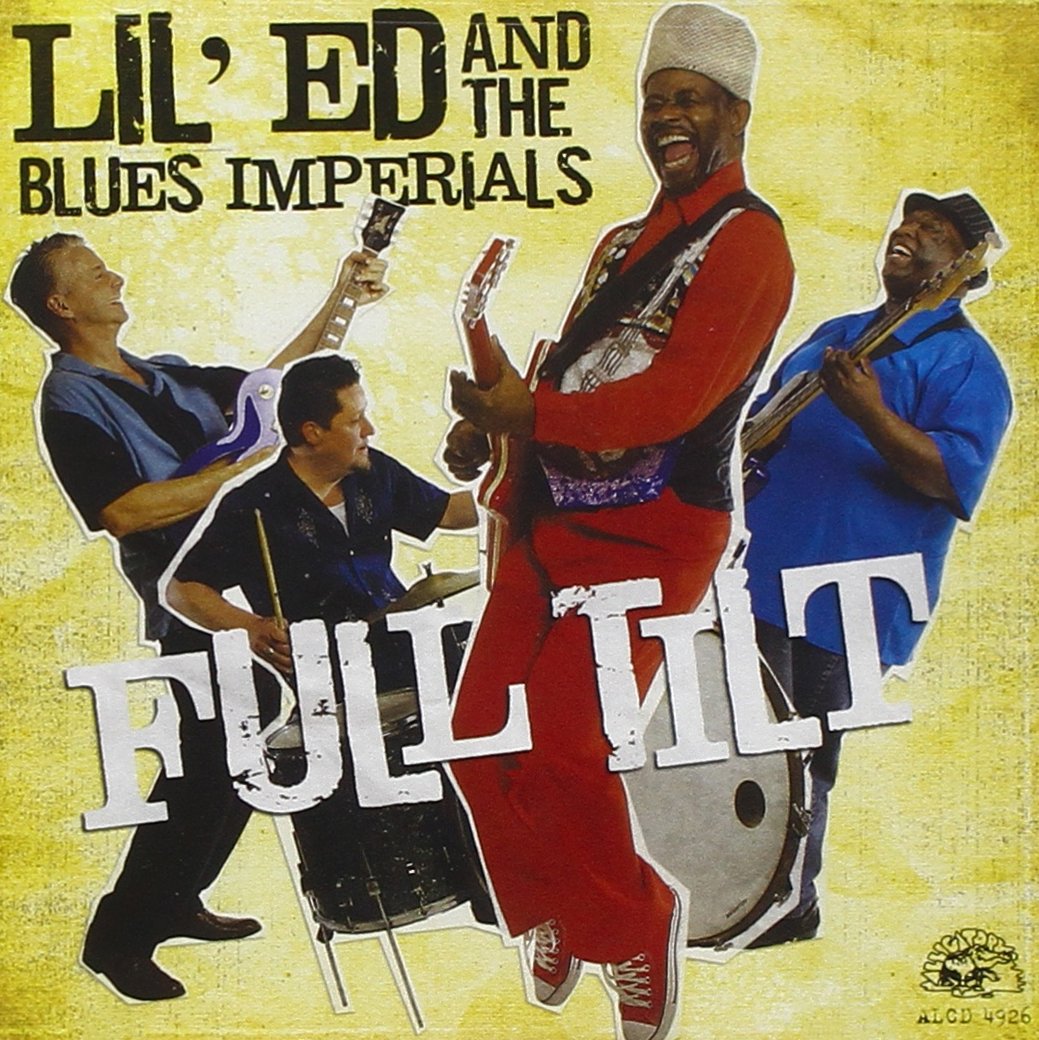 FULL TILT is simply the rawest, truest, most electrifying blues being made today. Wielding his slide like a switchblade, Ed stokes the up-tempo tracks to a white-hot intnensity and the tough, slow blues even hotter. A touch of barrelhouse piano and raucous horns adds to the fun and the Blues Imperials, throttle wide-open, match Ed step for step and push him to the best performance of his career.

Full Tilt isn't just an album title to diminutive slide guitar slinger Lil' Ed Williams. It's the only way he plays -- even on this CD's slow double entendre blues "Check My Baby's Oil," where Lil' Ed's guitar maintains its serrated keen as his Blues Imperials ply a gentle groove under their boss's most restrained warm-clay crooning. This disc also marks Ed and his backing trio's 20th year updating the slide-driven sound Hound Dog Taylor, Elmore James, Robert Nighthawk, and Ed's uncle J.B. Hutto defined in Chicago's fertile '50s and '60s blues scene. Williams assimilates his influences' finest qualities. He sings with the howling wildness of James and Hutto, which swaps the urban sophistication of the Ramp;B classic "First I Look at the Purse" for a dirty juke joint patina. The James and Nighthawk inspired melodies of Ed's slide on the heartbreak ballad "Life Got in the Way" have the slow ebb of falling teardrops. And when Ed tackles Taylor's traditional set-ender "Take Five" his speed and precise intonation, also drawn from Nighthawk and James, allow him to execute a slew of delirious, whinnying, moaning slide effects without upending the song. Track-to-track Full Tilt is raw, deeply rooted, and unremittingly entertaining. -- Ted Drozdowski

Williams represents one of the few remaining authentic links to the raucous, pure Chicago blues -- The Chicago Tribune

Ed and his half-brother Pookie received lessons and support from their blues-playing uncle, J.B. Hutto. "J.B. taught me everything I know," says Ed. "I wouldn't be where I am today without him."

"h3"About the Artist "p"Born in Chicago on April 4, 1955, Ed grew up surrounded by the blues and boasts a direct bloodline to blues history--his uncle and musical mentor was the great Chicago slide guitarist, songwriter and recording artist J.B. Hutto. He was playing guitar, then drums and bass, by the time he was 12. Ed and his half-brother Pookie received lessons and support from their blues-playing uncle, J.B. Hutto ,and spent their teen years making music together, and in 1975 formed the first incarnation of The Blues Imperials. They played their first gig at a West Side club called Big Duke's Blue Flame. Over the next few years, the group played every club in the neighborhood, and eventually the word reached Alligator president Bruce Iglauer.

"Ed and his band had a good reputation," recalls Iglauer. "I had only seen them live once or twice. I knew Ed was a hot slide player, but I had no idea what he and the band were really capable of..." It seemed like having a band this rough and ready would be a nice change of pace for the anthology, so I asked them to come down to the studio and cut a couple of songs. I never expected what happened."

What happened is not supposed to happen. Not in real life anyway. The band - never having been in a recording studio before - treated the studio like a club, playing live to Iglauer, the engineer, and all the people on the other side of the control room glass. Iglauer offered the band a full album contract on the spot. The end result of the session was 30 songs cut in three hours with no overdubs and no second takes. Twelve of those songs became the band's debut album, "i"ROUGHHOUSIN', released in September of 1986.

The national press reacted with overwhelming amazement. Feature stories ran in Spin, Musician, The New York Times, The Los Angeles Times, The Washington Post, The Boston Globe, The Chicago Tribune and dozens of other publications. Quickly, the band went from playing local bars to clubs, concert stages and festivals coast to coast. The band played The Long Beach Blues Festival, The San Francisco Blues Festival, The New Orleans Jazz amp; Heritage Festival and others before heading off to Europe, Canada and Japan. Spurred on by the band's rowdy performances, a legion of fanatical fans, proudly calling themselves "Ed Heads," eagerly spread the word.

"p"Lil' Ed And The Blues Imperials' next two releases, 1989's CHICKEN, GRAVY amp; BISCUITS and 1992's "i"WHAT YOU SEE IS WHAT YOU GET, brought them to more people than ever before. They toured Australia, then went back to Europe before joining the Alligator Records 20th Anniversary Tour. That tour teamed them with blues greats Koko Taylor, Elvin Bishop, Lonnie Brooks and Katie Webster at sold-out concert halls and showcase clubs. Highlights of the tour are captured on the 2-CD set, "i"THE ALLIGATOR RECORDS 20TH ANNIVERSARY TOUR. "p"After years on the road, the stress began to take its toll. Ed broke up the band and, for the first time, truly put his life together. After defeating his personal demons, Lil' Ed reformed The Blues Imperials in 1998, to the great delight of blues fans everywhere. They returned home to Alligator and released GET WILD! in 1999 and HEADS UP! in 2002 to widespread enthusiasm.

2006's "i"RATTLESHAKE brought Ed and company to their largest audience. Die-hard Ed Head "b"Conan O'Brien brought the band before millions of television viewers on two separate occasions. While in Chicago, O'Brien filmed a comedy sketch with Ed and then invited the whole band back to New York to perform on the show.

Lil' Ed's seriously inspired music will take you on a fast trip from your chair to your feet. Now, with FULL TILT and a schedule that will take the band on another non-stop tour across the country and across the ocean, Lil' Ed And The Blues Imperials will continue to rip, roar, rock, roll, bend and fully tilt into the hearts, minds, souls and dancing shoes of Ed Heads all around the world.

Your browser is out of date!

If Oracle Dyn will no longer be offering your service, is requiring you to move to their cloud service, or if you're simply looking for a change, we have a solution for you.

Let your friends easily connect to your Minecraft server with No-IP Dynamic DNS, anytime, anywhere. Create a custom URL to share with your friends to start playing on your own server now.

Tired of remembering your IP address to Remote Access a Device? Does your IP address change constantly? Our Dynamic DNS allows you to access your devices remotely without needing a Static IP address. All you need to remember is your hostname.

Let No-IP Manage your DNS infrastructure today. Trusted since 1999 by thousands of websites. What have you got to lose other than downtime?

How do you No-IP at home?

How does your business No-IP?

"No-IP's Plus Managed DNS allows my website to experience 100% uptime and fast connections, plus their support is great."
Learn More

We are excited to announce that we have expanded our international footprint so even more customers can benefit from our robust solutions without having to rely on third-party apps for translating our website.

We are very excited to announce that all Enhanced Dynamic DNS Subscriptions now include one TrustCor Standard DV SSL Certificate to ensure that your hostname is always secure.

Learn the simple steps you can take to ensure that your home, family, and belongings are safe when the summer months start.

Do You Want to Earn $5 in No-IP Credit for Each Paid Customer That You Refer to No-IP?

Learn More About Our Referral Program and Sign Up To Start Earning Today!

Get started with a free Dynamic DNS account, no credit card required.